“While you'll likely never see him wearing a cape or running around fighting bad guys, John Gray is as close to a real-life Superman as it gets. The Baton Rouge native musician, producer and teacher transitions almost effortlessly throughout his day and nightlife duties as if he carries a phone booth in his briefcase.”

“The Baton Rouge Symphony Orchestra has honored John Gray as its 2014 Teacher of the Year. Gray is the band director at The Dunham School, where he teaches jazz band, concert band, pep band and praise band to students in the sixth through 12th grades. The award was announced during the symphony’s Masterworks VII concert on May 8. Gray, a graduate of Southern University, has been band director at the private school since 2006. During his tenure, Gray has doubled the size of the jazz band and led students to receive many prestigious local and national honors. He also has doubled the size of the pep band, encouraging school spirit and participation through music.”

“When local musician and teacher, John Gray got the call that he was to receive the Teacher of the Year award from the Baton Rouge Symphony Orchestra (BRSO), he said he expected to be among two other recipients – but he was the only one there that day. Each year since 2005, BRSO has given awards to outstanding teachers in band, ensemble, and an overall music teacher. BRSO Director of Education and development coordinator Jessica Ottaviano said the selection committee found Gray’s nomination form to be so outstanding, that they only saw fit to award The Dunham School teacher this year.”

“If former Southern University band director Dr. Isaac “Doc” Greggs ever looked at you and said, “Can play,” you knew two things. One, you were a great musician, and two, you were kind of perfect. Greggs’ 36 years (1969 – 2005) with the Southern University marching band, which was nicknamed The Human Jukebox under his leadership, influenced and enhanced the musicianship and professionalism of some of Baton Rouge’s favorite bands, leaving his legacy to be appreciated by far more than just his students. On April 28, the word spread that the longtime band director had died at age 85; Facebook profile pictures were just as quickly changed to that of Greggs, while old scrapbook photos of time spent marching in blue and gold sprinkled the popular social media network, including photos of a very young set of guys who now make up the popular area brass band The Michael Foster Project.”
Leslie D Rose - Dig Magazine

hn Gray is a professional trumpet player for the Michael Foster Project, The JGray Jazz Trio and The Soul Jukeboxx. He's also a full-time teach at The Dunham School, a newly married man, and a mighty sharp dresser. When it comes to new duds, though, he'd rather spend a pretty penny at the tailor than at the mall.” 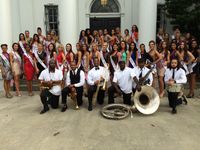 Check out the segment!!!

Check out our PRESS PAGE at Reverbnation also....